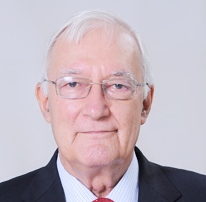 During his 25 years in the university system, he combined “gown and town”, dedicating some of his time to the promotion of educational projects that could contribute to the development of the youth. His concern for quality education led him to join other individuals who shared the same concern in registering the Educational Co-operation Society, a Nigerian not-for-profit NGO that promotes projects for the advancement of education. Under the umbrella of this NGO he was involved in managing and raising funds for the establishment of Helmbridge Study Centre in Surulere, which provided an environment conducive to learning and personal development for secondary school students in Lagos. During his years at Ibadan, he pioneered the project of Irawo University Centre, a private hall of residence for students of the University of Ibadan. Both of these projects are today vibrant centres that provide an integral education to large numbers of students.

He retired from the university system to help start a new project, this time on a full-time basis: the Lagos Business School. He was appointed Director General of the school in 1993 and was given responsibility for the creation of a business school of international standard that would provide management education relevant to the business environment. Together with his management team, he was involved in the development of a variety of executive programmes and seminars designed to meet the needs of industry. He taught operations management and strategy and wrote several articles and case studies in these areas. He was an active consultant to industry on strategic management issues. His recent book “The Pains and Gains of Growth” is a result of several years of studying and working with new business ventures in their growth stage.

In 1996 he led the process of raising the status of the school to that of a private university working closely with government. After government’s approval to operate as a private university in January 2002, Lagos Business School became the first school of Pan-African University, and he was appointed the University’s Vice-Chancellor with responsibility for developing the organisational structure of the new university and the growth of its programmes.

He has been given several awards in recognition of his contributions to the university system, professional institutions and the Nation. He valued specially the awards from those who shared in his efforts to improve the quality of education in Nigeria, particularly:

• Appreciation Award for commitment, dedication to duty and exemplary leadership, and for sharing the vision of quality service to the Nigerian University System, by the National Universities Commission (NUC) (2003)
• Award for outstanding dedication to the growth and development of the Lagos Business School and contribution to management education in Nigeria, by the Lagos Business School Alumni Association (LBSAA) (1999)
• Award for contributions to the development of Private Universities in Nigeria, by the Committee of Vice-Chancellors of Private Universities (2011)

Other awards were:
• Award in recognition of services and contributions towards the advancement of engineering, by the Institute of Electrical and Electronic Engineers (IEEE) (1986).
• Director Development Award, by the Institute of Directors Nigeria (IOD) (2003)
• Distinguished Lecturer Award, by the Nigerian Society of Engineers (2005)
• Award as a great alumnus of the University of Ibadan, by the University of Ibadan (2009)