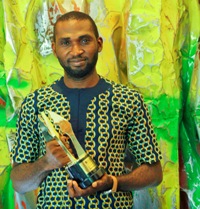 “I joined the LBS Executive MBA programme because I needed to build a good network I could rely on for expertise and business acumen. Three months into the programme, I am already achieving that goal,” he says.

Earlier this year, Mekwunye’s short film Oblivious was awarded ‘Best Shot Film’ at the AMVCA. The film, directed with his partner, Stanley Ohikuare, centres on a couple whose marriage is on the brink of collapse and the complexities that follow the husband’s attempts to get a divorce.

Mekwunye, who studied Insurance at the University of Lagos and Cinematography at the New York Film Academy, believes he is adequately equipped for future opportunities with his recent AMVCA prize and prospective MBA degree from LBS.

“LBS has touched every aspect of my life as well as my colleagues,'” he says, adding that the award has brought his company Riverside Productions much credibility and popularity that will be handy in the long run.

Dr Eugene Ohu, a Senior Lecturer at the Lagos Business School (LBS) is working with Meta (formerly Facebook) to conduct a Virtual Reality (VR) study across Africa.  The Virtual Human Computer Interaction (VHCI) Lab at the business school, headed by Dr Ohu will conduct cross-cultural academic research to explore the extent to which participation in a VR game design and play can increase empathy and compassion.

“The Future of Power in Africa” – Africa Energy Conference

news
Register For the event