The Link between Leaders’ Emotional Intelligence and Employee Engagement 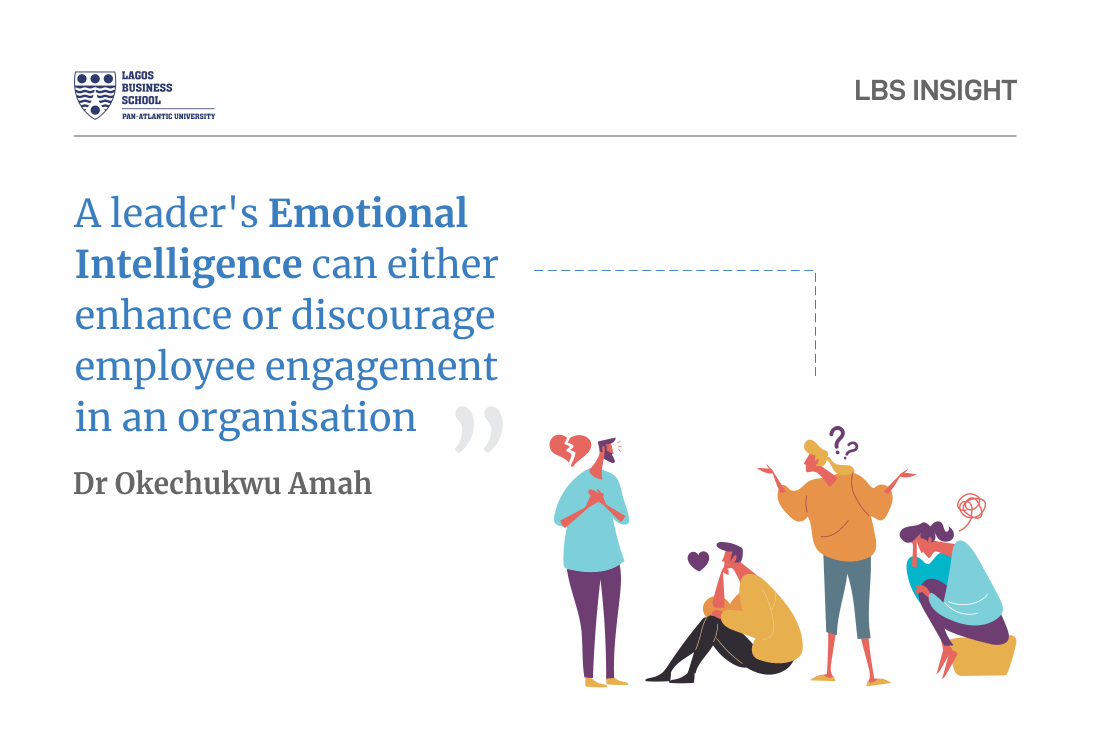 The Link between Leaders’ Emotional Intelligence and Employee Engagement

Superior organisational performance in the 21st century is achieved by a combination of appropriate leadership behaviour and engaged employees. Engaged employees apply their total self (physical, cognitive, and emotional) to assigned roles.  They are creative, proactive, innovative, and actively open to the frequent changes in a volatile, uncertain, complex, and ambiguous (VUCA)  organisational environment. Employee engagement (EE) has an effect on individual and organisational outcomes. Engaged employees report less unhealthy days at work, low level of loss in productivity, and are the main drivers of the competitive advantage of organisations (Amah & Sese, 2018). They have positive effects on cost, quality and customer service. Organisations with highly engaged employees have higher shareholders’ return and generate a higher revenue than those with low employee engagement (Harter & Adkins, 2015). Based on these advantages, HR managers and researchers have made effort to improve on EE by identifying its predictors. Despite their efforts, the world-wide level of employee engagement is reported to be only 32.5% (Gallup Worldwide Studies). This indicates that the search for more predictors of EE is far from over.

Identified predictors of EE are categorised as leadership factors, organisational factors/resources, and individual differences. Reviewing these categories, it is obvious that leadership is the key predictor of EE considering that it creates the organisational climate which affects other predictors of EE, and it also structures work in such a way as to bring out the best in each employee irrespective of their individual differences. Leadership style and leaders’ emotional intelligence (EI) are two characteristics of leadership which drive the nature of the organisational climate. The importance of leaders’ EI derives from the fact that it is the strongest driver of leadership and personal effectiveness, creates a positive or negative organisational climate where people can feel engaged or disengaged and is very necessary for a highly interdependent environment. EI is the ability to perceive, analyse, regulate and manage one’s emotions and that of others, aimed at promoting emotional and intellectual stability and growth. EI has four competencies namely: self-awareness (ability to perceive personal emotions and tendencies), self-management (ability to use self-awareness to regulate behaviour), social-awareness (ability to pick up emotions of others and understand what is happening in the environment of interaction), and relationship management (ability to manage social interactions using information gathered from social awareness).

Two questions remain unanswered by past studies. The first is; what are the organisational climates that drive employee engagement? To answer this question, it is necessary to fall back on the qualities of engaged employees. Since engaged employees are very innovative and creative, they will need to regularly speak out on issues that should be removed, encouraged, and enhanced so as to implement their innovations. Hence, they will thrive in a climate that encourages employee voice without consequence to the career of the employees. Engaged employees also apply their total self into their job, hence they would want to have a leader who can be trusted to do what is right for the organisations and their career.

The second question is: can leaders’ EI create such an environment? This is addressed by an empirical study. 450 participants from three organisations participated in a recent empirical study to find out how leaders’ EI affects the clime of trust and employee voice. This study was undertaken because there is a shortage of studies involving leaders’ EI and the climate it creates despite the realisation that leaders’ EI is the main driver of leadership effectiveness in the 21st century. The data acquired were analysed with an advanced statistical method. Interesting results were obtained as follows:

The above results have the following implications for the organisations:

Emotional intelligence is not hereditary but can be developed in leaders. EI can be developed using a combination of well-structured seminars and coaching process. For example, in Lagos Business School, most of our leadership development programmes contain modules that deal with developing EI. These are modules that organisations can take advantage of to develop the EI of their leaders. High EI in leaders is not a luxury but a necessity for success in the 21st century.

1. As a leader, what employee engagement style have you adopted recently?

2. As an employee, what currently motivates you at work?