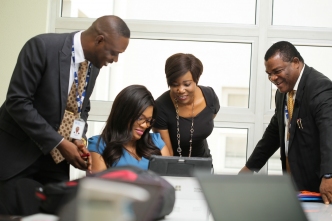 Leadership is tough, true! But have you ever wondered if being a ‘hard’ leader makes it any easier for the leader to lead, or the follower to follow? It doesn’t! Research suggests that leaders that rely on uncomplimentary methods to get things done not only harm their team members, but harm themselves. In fact, such leaders tend to replicate themselves in organisations such that the environment of work becomes toxic for everyone as the tradition is carried on down the ‘chain of command’. But why should we care?

We live in an increasingly complex and uncertain world, defined by change and innovation. The increased volatility and pressure of today’s world of work takes its toll on employees and by extension, the organisation. Research by the Global Wellness Institute shows that a large proportion of the 3.2billion strong world workforce are unwell, costing an estimated 10-15% of global economic output in medical expenses and loss of productivity. To give you an even clearer picture of the problem, in the United states where the most comprehensive data are available, the cost in dollar terms is estimated to be about 2.2 trillion dollars, or 12% of GDP. While the wellness challenge emanates from a variety of causes, including workplace accidents and other work-related diseases, at least 38% of the world’s workforce suffer from excessive pressure on the job, not to speak of increasing feelings of job insecurity. In a context like ours with the added challenge of underdevelopment, I imagine that the situation is even more dire.

In this two-part series, we explore ideas around facilitating a more positive organisational environment via positive leadership. Research has shown that a positive environment of work facilitates employee discretionary effort (the watered down version may be called ‘initiative’), that is necessary for any organisation that wants more than ‘just enough’ from their employees. Positive Leadership is not just another management fad; it is a way of looking at leadership that is premised on the idea that ‘what is good about life is as genuine as what is bad and therefore deserves equal attention’, borrowing the words of the renowned psychologist, Chris Peterson. Put another way, if you can get the same or better results through a positive organisational environment, why would you want to do it a different way?

According to the FT Lexicon, Positive Leadership has at least 3 areas of emphasis:

Positive Leadership is not a leadership style per se, it is more appropriately a leadership orientation. The goal is not the elimination of the negative as much as it is to transform those negatives into opportunities for success. According to Kim Cameron, a foremost proponent of Positive Leadership and author of the bestselling ‘Positive Leadership: Strategies for Extraordinary performance’, Positive Leadership does not deny the existence of the not-so-pleasant-events and experiences in organisations, rather, it focuses on using ‘scientific evidence and theoretically-grounded principles to promote outcomes such as thriving at work, interpersonal flourishing, virtuous behaviours, positive emotions, and energising networks’ (FT Lexicon). We could say that it is how ‘leaders enable positively deviant performance, foster an affirmative orientation in organisations and engender focus on virtuousness and the best of the human condition’.

Let’s take this a little further: Kim Cameron’s Positive Leadership has 4 key components including: Positive Climate, Positive Relationships, Positive Communication and Positive Meaning. We will delve into these in a little more detail in the second part of this series. For now, it suffices to say, that the leader is largely responsible for the environment of work the ‘followers’ experience. In fact, research by the Hay’s group indicates that 70% of the climate in a team or organisation is defined by the leader. The contagion effect will take care of the rest.

In case this all sounds too intangible, what we have tried to do in part 1 is give you a sense of what positive leadership really means as a foundation for part 2. It is a pragmatic approach to aid the sustainability of a productive work environment where employees feel valued rather than used. In the second part, we will explore specific ways that leaders can facilitate a positive environment in their teams and organisations, and begin to reap the benefits of a productive team in spite of the pressures of life and work.