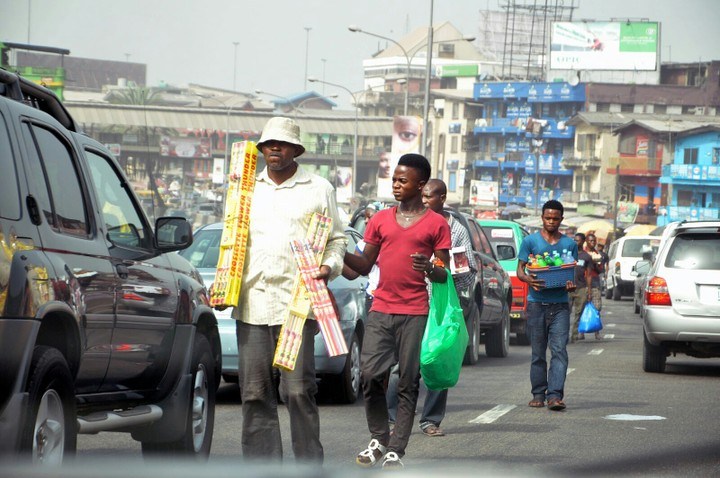 Hawking or street selling in Nigeria and Africa at large is a unique phenomenon that arose out of the need to solve societal problems such as unemployment, poverty and consumer goods accessibility. It is a booming informal sector that has proved resilient despite various governmental efforts aimed at eradicating it. Government at all levels have policies and prohibitions in place to ban hawking or street selling because they are seen as illegal, valueless and problematic—hence, a need to eradicate it from the society even though there is yet to be a better alternative. The various “street selling not allowed” “ hawking not allowed” signage that adorn our public places, the unending fining and arrest of street sellers, and the construction of shopping malls and ultra-modern markets across cities have had little or no effect on reducing street selling in Nigeria.

However, over the years, street selling has become very popular and highly sought after across all social statuses especially in urban areas. It is a common scene nowadays to see middle and upper-class consumers purchase assorted goods in traffic jams and by roadsides on their way to or from work and other commutes. Hawkers have devised a number of ways to convey their goods aside from the traditional head porterage to include wheelbarrows, table-tops and mobile kiosks among others. This reality is also dawning on both large and small businesses that unorthodox methods of selling such as hawking is a viable means of marketing and selling to more consumers. In the city of Lagos alone, it is estimated that about one billion Naira exchanges hands in hawking per month. In its seemingly haphazard nature the hawking informal economy has been observed to be highly organised with its own degree of norms and regulations and social roles that ensure it meets the needs of the majority of the populace. Recent studies have thus shown that hawking as a major activity in the informal economy is not necessarily illegal as hitherto generally believed. Instead, the activities of hawkers in developing economies like Nigeria mostly seem to be outside of formal regulations due to the ambiguity of policies and regulatory bodies’ activities. Hawkers sell their wares through major routes across cities and even pay different forms of taxes to both state agents and informal tax collectors.

With regards to the organisation and channel of hawkers, Multinational Corporations (MNCs) and other local organisations have realised the efficiency of reaching consumers through hawkers. Existing data confirm that close to 60% of what MNCs sell in Nigeria pass through the hawking channel before getting to the final consumer. With the growing number of informal entrepreneurs, hawking will continue to expand in size and prominence in developing economies. Formal organisations recognise this possibility and are strategically incorporating informal organisations into their selling operations. It is a win-win situation for both sides of the economy and for the society with an increase in job opportunities, better consumer reach, improved standard of living and increased product design innovation.

The government is still lagging behind though. All levels of government still largely regard hawkers as nuisances that should be eradicated. This perception continues to influence their policies which in turn make life harder for the average hawker on the street. However, at this stage in Nigeria’s economy, the government cannot continue to ignore the growing importance of street selling in creating a stronger economy. There is need for a change in approach towards formulating policies that will formally recognise informal sector businesses including hawkers and their activities. This approach was adopted by South Korea with the country providing platforms that ensure hawkers are recognised through proper signage thereby modernising street selling and making it a legally recognised distribution channel. This proved to be a turning point in the economy of South Korea and could also be for Nigeria, if adopted.

Therefore, businesses and the government need to be creative about how to engage unconventional distribution channels such as hawking. Such engagement should be prompt and innovative in order to consolidate the benefits of hawking and move Nigeria closer to the achievement of some of the United Nations Sustainable Development Goals (SDGs).

What steps could be taken to formalize the street selling business in Nigeria?

Is street selling a viable business?

What can salespeople learn from street sellers?

When involved in negotiation with a hostile out-group, it is necessary to engage a method that would be generally acceptable to the community

Economics
Back
Register For the event
×